An interview with architect Rem Koolhaas in the building of his architectural firm OMA (’Office for metropolitan architecture’) in Rotterdam. Koolhaas discusses his major, mainly Dutch, projects making use of drawings and scale models, none of which were actually realised at the time, though soon after they all turned into points of reference in today’s discussion about architecture: among others Exodus Londen (1972), City of the Captive Globe, New York (1972), Swimming-pool (1976), Welfare Palace hotel NY, (1977), Parliament at the Hague (1978), Residential Area Berlin (1980), Danstheater the Hague (1980), Residential Area Amsterdam Noord (1980) , Panopticon prison Arnhem (1979-1980), Parc de la Villette Paris (1982), Expo Paris (1983) and Office Tower Rotterdam (1984). Cornelis makes Koolhaas present himself, but in such a way that it’s really he who is presenting Koolhaas. The stage setting in a dark projection room situates the architect in a mythical perspective, but it also reveals his fundamental solitude and vulnerability. When he does appear out into the open, Koolhaas turns into an enlightened entrepreneur, an architect who wants to make buildings leaving all the rumpus behind and at the same time undermining apparent cohesion – architecture, not as a composition but as a situation. The discourse of Koolhaas seems clear and self-evident, but this clarity is like a rebus – even though it is also like a poem, in which the essence of Koolhaas’ attitude is revealed in a direct way, in the rhythm and the editing of the images themselves. On the one hand the balanced construction brings the paradoxical aspects of Koolhaas’ work to the foreground, but on the other it also reveals its internal coherence. “I think we are dealing with a unique congruence between maker and protagonist. It has become a documentary on the verge of a feature film, or vice versa. (…) Cornelis himself is never looking for an explanation or even less for commentary. He wants to show. No, he does not even want to show. He wants to see for himself, to discover everything there is out there for us to see. The film is his instrument to approach people.” (Text fragments taken from Geert Beckaert, Koolhaas presenteren, Maastricht 29 November 2004, published in de Witte Raaf 117)

00’00" The architect Rem Koolhaas at OMA (Office for Metropolitan Architecture) near Maasbruggen, Rotterdam, talking about his projects. Views of the OMA offices and panoramic view of Maasbruggen. 01’25" Stills of uncompleted projects : City of the captive globe New York 1972, house in Miami 1974, swimming-pool 1976, Welfare Palace Hotel New York 1976, Delirious New York 1978, parliament building in the Hague 1978, Prime Minister’s residence in Dublin 1979, Panopticon Prison in Arnhem 1979-80, residential district in Amsterdam-North 1980, building in Rotterdam 1980, Ballet Theatre in the Hague 1980, Parc de la Villette in Paris 1982, Paris Expo 1989, office block for Rotterdam 1984. 05’30" Rem Koolhaas showing slides and talking about the philosophy of OMA and his designs ; his student days in London (slides of his Exodus project, London, 1972) ; his move to the U.S.A. (slides of the Downton Athletic Club, the Great Russian Hotel and Radio City Hall, New York). 21’00" Koolhaas talking about how OMA was founded, about hotels as a typical metropolitan phenomenon and about his City of the captive globe project (New York 1978). 30’50" Koolhaas using a plan of Rotterdam to explain his ideas for a project round Maasbruggen, showing sketches and the final drawing, alternating with pictures of Maasbruggen. 47’55" Koolhaas using aerial photographs to show where he was to have built a residential district in Amsterdam-North (1980) and talking about the difficulties he encountered in trying to collaborate with residents’ committes and the architect Erskine. Views of urbanisation projects, plans and models. 54’25" Koolhaas drawing the plan of a prison with cupola at Arnhem and of his own project based on an adaptation of the panoptical prison (drawing and models for a prison as a "total life programme"). 65’35" Koolhaas toying with the various possibilities of models placed on a plan of Rotterdam, in order to explain his idea of an envelope (1984) for a new office block. 67’30" Stills of waste ground explaining Koolhaas’s fascination for no-man’s-land, which inspired his projects of the Parc de la Villette and Expo ’89 in Paris. 73’30" List of people working at OMA. Credits. 75’00" (Source: Jef Cornelis 1964 - 1990, Espace Art Contemporain : Maison de la culture et de la Communication de Saint-Etienne, 1991) 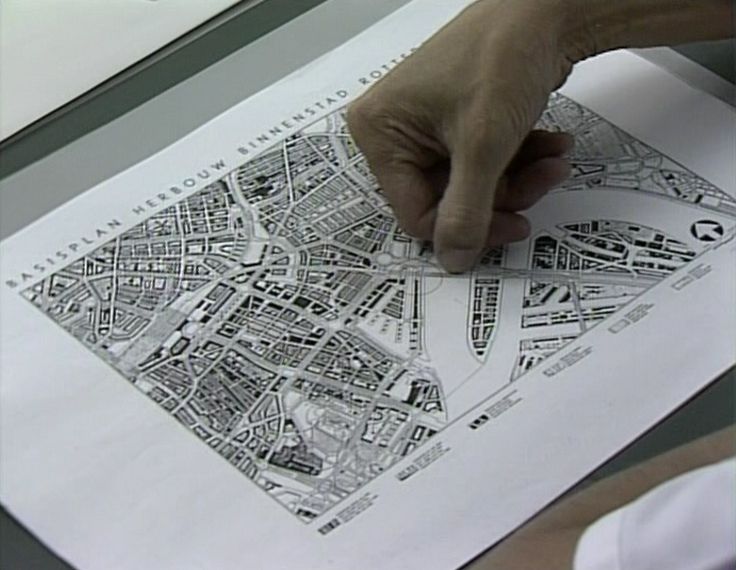 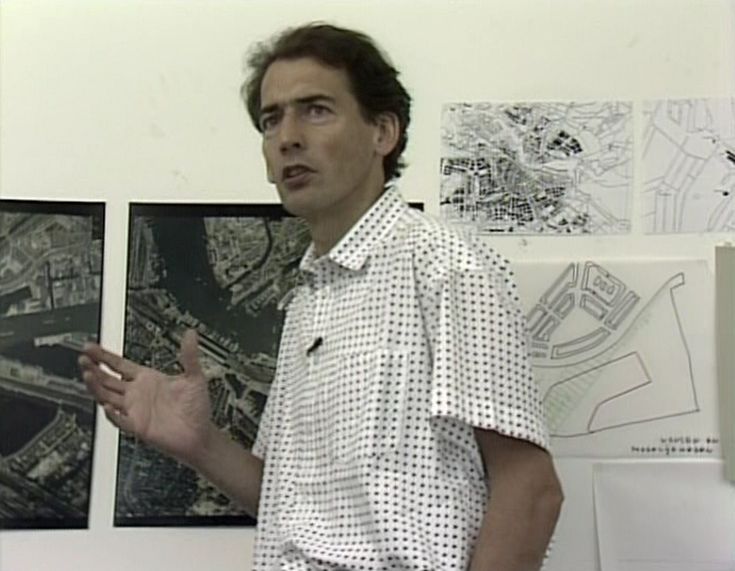