A portrait of the Dutch author and essay writer Jacq Firmin Vogelaar (1944), on the occasion of his ’All Meat’ (1980), a book aiming at nothing less than a thorough deconstruction of recognizable reality in order to set up a new construction with the debris. Vogelaar discusses the philosophy of the fragment, utopia, meat, (linguistic) machines, Francis Bacon. His unconventional writing method modelled the structure of this report.

Content:
00’00" Daniel Robberechts introducing Jacq Firmin Vogelaar and asking him about his book All meat and critical reactions to it. Alternating with pictures of Vogelaar’s bibliography and quotations from the press. 07’35" Vogelaar only wants to speak about his work and his book. 10’05" Title. He suggests that Daniel Robberechts should copy his own writing method for this "television portrait". Title : Instructions. 11’50" Vogelaar among the bookshelves in his library reading All Meat Title : Brain flora. 13’55" Vogelaar demonstrating the book’s structure. 15’30" Title : Scenario. Robberechts and Vogelaar showing the different parts of the scenario of All Meat. Details of pages. 19’55" Title : Diagram of power. Vogelaar drawing the diagram of an institution on a board. Title : Spaces. Vogelaar illustrating his theory by means of engravings by Piranese. 26’40" Vogelaar talking about the structure of the town and its picture language. 28’25" Title : Town writing. Superimposed views of traffic signs and graffiti in the centre of Amsterdam. 31’00" The writer reciting bits of his book. Title : Meat sentence. 34’00" Title : A sentence, no sentence. Vogelaar showing how his sentences are constructed on a board. 38’35" Title : How it functions. Vogelaar talking about the overall structure of the text. 40’50" Vogelaar showing a pile of documents assembled for a book about entrepreneurs he is currently working on. 42’55" Title : Heart-height. Vogelaar speaking about his movement towards texts in foreign languages and his references to other artists and writers. 45’00" Title : Library. Vogelaar showing his favourite authors in his library. Title : Greed = revenge. Vogelaar talking about his appetite for reading. 48’25" Title : We do not have enough. Vogelaar enumerating forgotten themes. 50’05" Title : On the couch. Vogelaar talking about his childhood and about narrative. 52’20" Reacting to a painting in a catalogue, Vogelaar admits he has something in common with Francis Bacon. Title : Reading a painting. Robberechts reading a description of a work by Bacon, with Vogelaar pointing to the details. 60’10" Credits. 60’20"
(Source: Jef Cornelis 1964 - 1990, Espace Art Contemporain : Maison de la culture et de la Communication de Saint-Etienne, 1991) 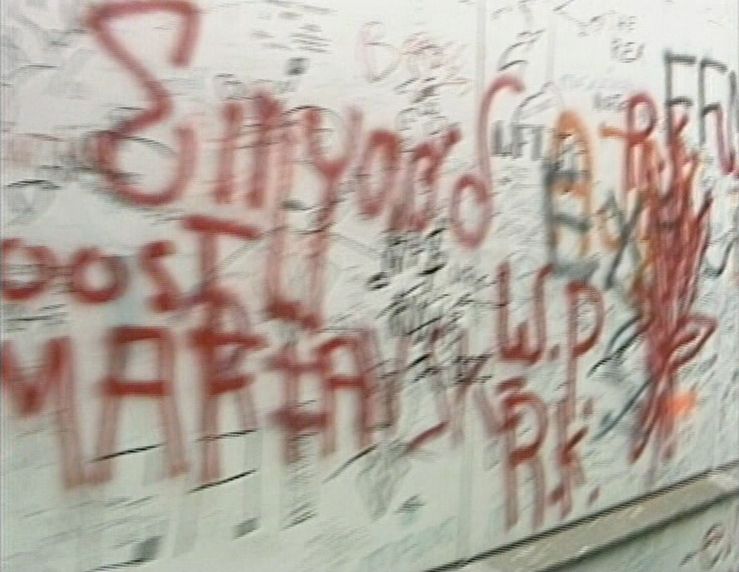 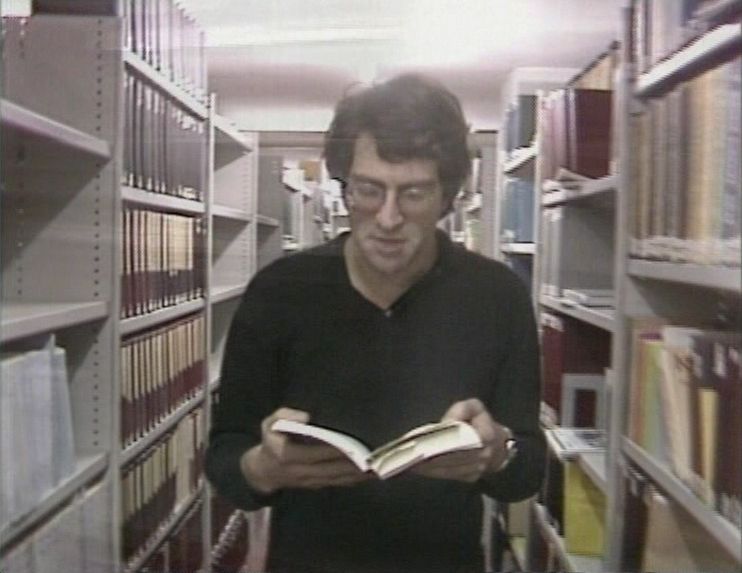