Daniël Robberechts (who passed away in 1992) fully applied himself to writing after his studies in mathematics. In 1960 he was already a full-time writer, but not a ’professional’ one: without the financial support of his wife, Cécile Faniel, he would not have been able to write. After publishing countless texts, De Labiele Stilte (“not a novel”) appeared in 1968, followed by, among others, De Grote Schaamlippen (1969, “a dynamic self-portrait”) and Praag Schrijven (1975), which stood out because of their deliberate and extensive deviations of the prevailing narrative prose. From 1972 he would be involved in a number of literary magazines, including the one-man magazine “schrift”, in which he published fragments from an extensive “total text”-in-progress from 1977. This film offers an outlook on Robberechts’ intimate working process, from the backroom of his home in Everbeek. Interviewed by author and visual artist Oscar de Wit, he talks of writing and authorship, of the link between mathematics and written language, of his desire to grasp reality in a text and transcend the supremacy of the story - “the framework embedded in our brains limiting our perception”. The act of writing, jotting down, censoring and rewriting is followed in part over a tele-board. Robberechts’ methods, the collecting, cataloguing and merging of text fragments into an overall whole, seem to have turned into a visual language as well: images are layered, ignoring the all-mobilising role of the narrative and the commentary in documentary format.

Content:
00’00" Daniel Robberechts printing what he is writing on a screen (work in progress). 03’00" Robberechts at home in Everbeek speaking about public readings of his writings and reading an extract from Volume 8. 04’10" Interior views of Robberechts’s house, with biographical information superimposed. 06’00" Robberechts interviewed by Oscar de Wit, with Robberechts fetching his mail and the postman putting it in the letterbox superimposed. 07’30" The interview (continued), with superimposed views of Robberechts choosing books in his library. 13’00" Views of the writer reading in his study, with information concerning his wife’s financial help and bibliography superimposed. 13’40" The screen. 17’10" Robberechts explaining how he writes "in fragments" using files, and the way he forms his themes and characters. 28’30" Robberechts telling de Wit that he writes "from a sense of absence" and about his problems with language and his fear of failure. 33’45" Robberechts showing different versions of his manuscript. 36’15" Robberechts defining how he evolved from writing from necessity to writing for pleasure. Reading extracts from Books 5 and Book 7 and speaking about how he creates his characters (text superimposed). 49’05" Robberechts typing out his work, photocopying it and reading a extract from Book 6. 54’00" Robberechts showing his files with their key words and his register of figures (text superimposed). 60’30" Robberechts reading and typing fragments of Book 6 on a word processor. Overall view of his house. 62’00" Credits. 62’30"
(Source: Jef Cornelis 1964 - 1990, Espace Art Contemporain : Maison de la culture et de la Communication de Saint-Etienne, 1991) 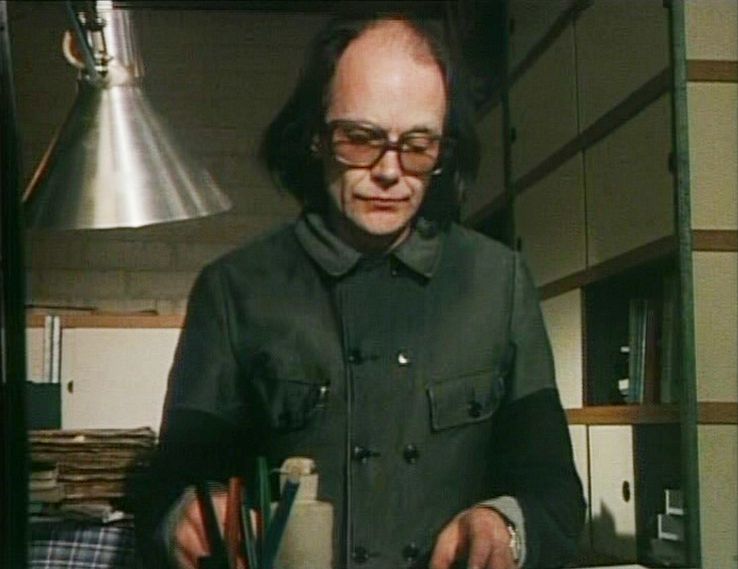 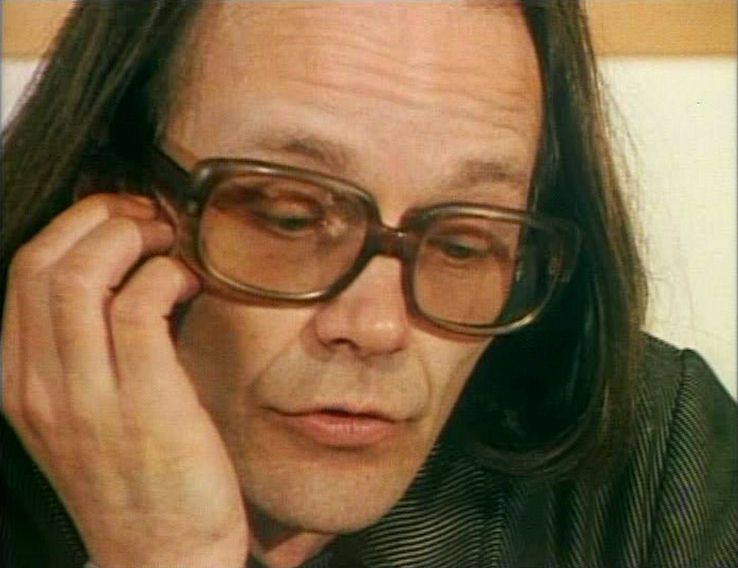